Do We Have to be Arabian to Celebrate Ramadhan? 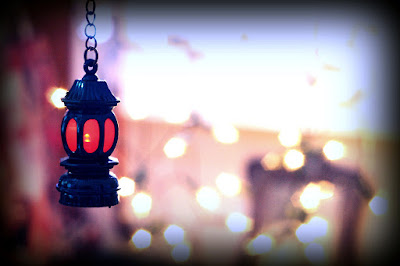 
This song always pops-up in my mind everytime I think about Ramadhan. I believe you will agree that the song is almost identical with this holy month. It catches our ears in television and shopping centers anytime.

But if you think it is religious, think it again, because you are totally wrong. Have you ever checked out the lyrics? Just google "Habibi ya Nur al Aini" and you'll be surprised to see the singer, Amr Diab, devotes the song to---guess what?---a beautiful woman. The lyrics above translated as "darling, you are the glow in my heart".

I know, you probably think "habibi" is addressed to Prophet Muhammad (as we know that he is on the top of God's favourite list) and the song was created to adore him. But the video clip will shut up your mouth. There are beautiful women in frame, guys, enjoy it.

"Habibi" is just one of our silly and misleading ways to welcome this blessingful month---along with camel and pyramids pictures everywhere! This condition has been always like this since forever, and I don't know why people use those symbols to decorate public spaces.

Well, I would not talk about kurma again. I did it 3 years ago and being controversy!

Look, can you imagine how camel and pyramids relate to the spirit of Ramadhan? Even pyramids are antidote to the doctrine of the Oneness of Allah. Because it symbolizes Paraoh's dignity in ancient Egypt civilization, while Paraoh called himself God.

I don't know if I have to cry or laugh to see how people easily follow almost everything served to them. Do they ever asking why? Where is critical thinking? Thanks to capitalism for choosing the wrong yet effective promotion content.

Ramadhan is not about arabian music and dessert-thing. Ramadhan is the time to cuddle with God more often, and to help the marginalized communities. We can fast and still being ourselves as Indonesians. We could prefer batik not thawb tunic, kolak not kebab, and speak Indonesia accent not arabic. We also have plenty of religious songs from local bands like Ungu and Gigi---and they sing about God!

It's time to turn off the middle east music, and enjoy Ramadhan as yourself not anyone else.