A Girl Who Prays Under An Umbrella (Photo Story)

With her sweaty hair and melting ice cream, 8 year old Asima from Filadelfia Church could not pay attention to the Easter Mass she's attending under 39°C Jakarta.

But this is not the mass most of Christians in the world usually attend. Filadelfia chirch had to carry out a "mass on the road" with colorful umbrellas, in the front of Indonesia presidential palace, since the church is banned by local government of Bekasi, Indonesia.

This was the third year for HKBP Filadelfia, together with another discriminated minority groups, commemorating Easter under the sunlight to demand justice. The local government follow the pressure from local intolerant groups, despite the high court in 2011 had ruled the church is legal.


The Easter celebration here was very humble. Three baskets of Easter eggs were placed on the altar, a simple altar from a plastic table, decorated with a tablecloth. One Indonesian flag was raised on the right side of the altar.

Asima Panjaitan was on third grade in an elementary school, when she, as the daughter of Filadelfia priest, Palti Panjaitan, filled her childhood memories by attending "mass on the road" for the fourth times.

After two hours of preaches and religious songs, Asima got a well-decorated egg. She also took some colorful biscuits and other snacks. She was keeping the egg on her hand while we were having conversation

“It is tiring but no problem. This is for my church,” she said.

“What is happened with the church?”

“My church is still locked. We cannot pray there.”

Asima did not know exactly why her church was locked by city government of Bekasi. She only remembered that few Muslim groups were monitoring her church. Intolerant groups sometimes patrol around the church area.

Asima remembered a bad experience at Christmas Eve, when his father leads the people of Filadelfia church to hold a mass in their church only to be blocked and protested by the intolerant groups.

“My dad was full of mud, cow’s feces, and urine. His motorcycle was dirty. They threw rotten eggs,” she added. She even saw her holy book was torned too. The Bibble was dirty and smelly.

Asima did not have a heart to see his father was treated like that.

Knowing some intolerant Muslim groups made Asima has no option but afraid. Asima confessed that she hates Muslims sometimes. “It is because the Muslims sometimes stress out my dad,” she explained.

Not all Muslims are bad, said Asima, there are some nice Muslims too. But no matter how hard she tried, Asima feels uncomfortable every times she meets a woman with hijab.

“I am afraid. If there were church events near my house, I covered my face with hands. I did not want to be seen. Our walk to the church was also protested,” she told.

Asima is getting more afraid of Muslim groups because they once cursed his father.

“The Muslim groups were shouting to my dad, ‘We’ll see, he will be die! Die! For sure!’,“  Asima explained, her voice was shaking. 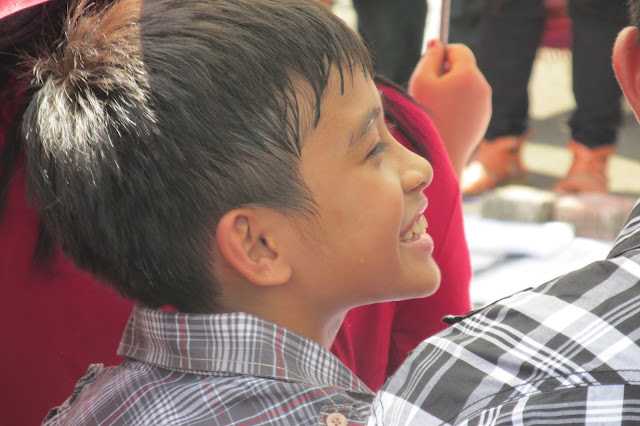 “Do you have Muslim friends?”

“I have once. But they do not want to be friend with me anymore. I do not know why,” she said.

Asima is scared, but she really hoped to bring back a warm relation with the Muslim groups. Many times she prayed.

“Dear God, please forgive them who have bothered my community. God, I hope my church will be still advocated by the people. Amen,” she told me the example.

However this is Easter, a time to be happy to be among family and friends. Asima said she is glad to celebrate Easter despite the location. But deep down, she hopes to join Easter mass next year inside their church, just like other children.

Dedicated for the children of HKBP Filadelfia and GKI Yasmin churches